Are you riding the waves of culture shock since arriving in the U.S.? Don’t worry, you’re not alone.

The sun is too bright today. The traffic didn’t seem so bad at first but is completely unbearable lately. Even the Los Angeles air smells funny now, not refreshing like it did just weeks ago. What happened?

When students leave their home country for the U.S., the transition period they may experience is known as culture shock. World-renowned anthropologist Dr. Karlevo Oberg identified four stages to this phenomenon: Honeymoon, Anxiety, Adjustment, and Adaptation. Each lasts three to six months, depending on the person.

Honeymoon. “It felt like I was in a movie,” says Serena Wong, an educational counseling graduate student from Canada. “I was excited for the weather of course, and my program. I knew there would be a lot of international students so that was comforting.” Students like Serena arrive hopeful and excited to mix with different cultures, and ready to hit the books. The sense of wonder during this period is enough to make even the smoggiest corners of Los Angeles glisten.

Anxiety. For many, this is the most difficult part of the transition to life in the U.S. The novelty and excitement of a new environment are replaced with feelings of homesickness and frustration with foreign surroundings. It is common for students to feel withdrawn and depressed for up to a few months. “The first month was the hardest,” says engineering student Anthony Le from China. “I was trying to understand the culture here.” He admits he was quieter than usual during this phase, observing and taking everything in. Like many students, he was hesitant to participate in class discussions. “In Taiwan, people seldom ask questions in class. It’s very different here,” says computer science graduate student Yu-Chung (James) Cheng. This can still be a challenge even for students fluent in English like Nigar Rasulova, a communication graduate student. “I was mostly fluent when I got here but I still had hesitations speaking in a class full of native English speakers,” she says.

Support is critical during this stage of culture shock. “International students face a lot of uncertainties,” says Ran Liu, a postsecondary education alumna. “The challenge with culture shock is wanting to behave appropriately and not wanting to take risks.” Nelson Chan, a business accounting major from Hong Kong says the rough part of his transition was short-lived, thanks for the support he received from his aunt in San Francisco. “She taught me the cultural expectations,” he says, “like what things not to say because they would be misconstrued in America.”

Adjustment. As students adjust to cultural and academic expectations, their confidence begins to rebuild. “Learn to pick your battles,” advises engineering student Nandish Kolur Somasekhara from India. “Sometimes you have to let things go and other times you have to push for what you want.”

Adaptation. Students feel more at home in their current surroundings and have, to some degree, mastered new lifestyle and language skills.

“Be ready to start over, but don’t be afraid,” urges Nigar. “Just go for it and stay committed.” And if a bout of loneliness ever sweeps through from time to time, just remember that there thousands of other international students at USC riding the waves of culture shock with you. 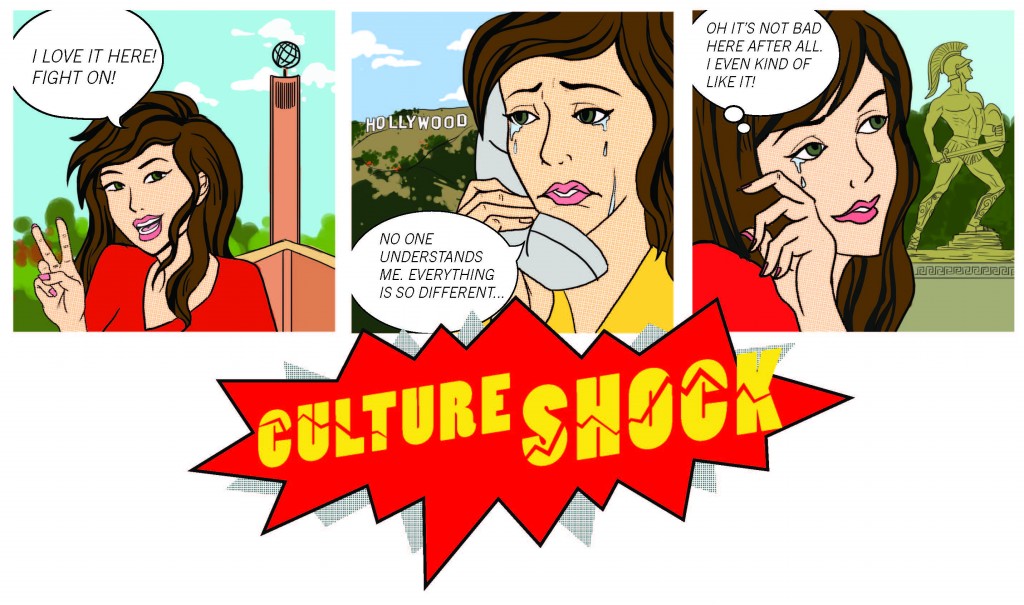 Lydia Siriprakorn earned a Master of Professional Writing degree from USC and is originally from Washington, D.C.

Illustrations by Shelley Xia. Shelley earned a Bachelor of Arts in Graphic Design from USC.